“When you build the infrastructure, the cyclists will come”

At Kirkstall Forge’s latest Different by Design event, we welcomed Klaus Bondam to Number One for a discussion on implementing efficient cycling infrastructure into our communities.

A member of the Copenhagen city council for nine years, serving as the mayor of technical and environmental affairs for four of them, Klaus has played an influential role in the city’s extensive cycling infrastructure. Since 2014, he has held the position of director at the Danish Cyclists’ Federation.

Throughout his keynote presentation at the Different by Design event, Klaus offered insights into cycling in Copenhagen and how Leeds and the wider UK could develop its infrastructure to create efficient cycle connections.

Klaus opened his talk with by quoting Jan E. Jørgensen, a member of the Danish Parliament: “The world has three major problems – the climate, the congestion and the obesity. The bicycle is the answer to all three of them”. These issues are ones faced by Copenhagen, Leeds and the wider UK alike, but for the bicycle to be the resolution, politicians, businesses, architects, town planners and the community must be on board.

We need to build the community for the future, according to Klaus. Currently, children are dependent on parents to drive from A to B, yet with efficient and safe cycling infrastructure a community can be created where they can go around by themselves – it allows the communities to evoke freedom. However, Klaus argues that a lot of modern design and redesign of existing structures doesn’t incorporate this ideology, a topic covered in an article he wrote for The Guardian.

Klaus also highlighted the beneficial factors of opting to cycle over taking the car, alluding to comments made by young children – those will make up this future community. Speed, efficiency and being environmentally friendly were cited as the main reasons by the youngsters, all of which are relevant to wider society.

Our communities currently can’t support this movement to an instant widespread implementation of a cycling culture. As Klaus put it: “It’s hard to build our way out of this situation in an urban context (due to cars), we have to find other ways of transport that are more efficient”.

Using Copenhagen as a case study

As a significant figure in developing Copenhagen’s cycling infrastructure, Klaus spoke to the audience at length about how the city has embraced a two-wheeled culture.

A city smaller than Leeds, Copenhagen already has a strong cycling mentality instilled in its near-to two million population. Discussing the city’s 2018 cycling statistics, Klaus said 49 per cent of all trips to school and work were made by bicycle (up from 37 per cent in 2008) and 28 per cent of all trips were made by two wheels. Klaus told the audience that 39 per cent of Danish households don’t have access to car and that 30 per cent of car journeys are less than 3.5 miles – showcasing the reliance and importance of cycling in the country.

The reasons why Copenhagen’s residents opt to cycle also offer insight into why it is a preferred method of transportation: 55 per cent cycle for ease and 46 per cent for speed, whilst 46 per cent also cycle for exercise. Klaus stated that these three reasons tackle the original statement by Jan E. Jørgensen

Klaus commented on this: “Copenhagen has a strong cycling culture and society sees everyday cycling as an equal as getting in a car. People think when they embark on trip – what is the most efficient for this journey? The car is not the answer in this situation.”

Copenhagen’s rail network has also helped with this cycling culture. Klaus highlighted that since it was made free to take bicycles onto trains six years ago, 11 million bikes per year are taken aboard and there has been an eight per cent increase in passengers – “there is an essential connection between walking, cycling and public transport”, as he put it.

But it’s the infrastructure where Copenhagen excels. Super cycle highways are key according to Klaus, making longer distances on electric bicycles more accessible. He also spoke about his work on the city’s Dronning Louises Bridge where he led on a redesign to increase capacity and liveability – resulting in a 60 per cent increase in cyclists across the bridge.

There are 400km worth of cycle tracks in Copenhagen, with kerbs and segregated tracks on all major roads, almost everywhere. It’s about creating a network for ease and efficiency to help cyclists.

Improving infrastructure for a better future

As Klaus stated: “Our cities are 1000 years old, but we’re basically letting the developments of the last 50-70 years define our futures. That’s wrong. What can we do differently? We need to have patience. It will not happen overnight. It takes a vision that many need to sign up to, but it is great to see CEG embracing that opportunity.”

“We must take a democratic approach to conversations around transport issues,” according to Klaus. “The discussions shouldn’t just be about highways – public transport and cycling facilities much be included.”

He also stated that in the smart cities of the future, cycling offers a low-tech solution which must sit with the likes of intelligent traffic systems and mobility as a service, and there needs to be an agreement on what is needed for a city that is alive, engaging planners, developers and designers for the city of the future.

He believes that cycling infrastructure in cities such as Leeds must look and feel the same, offering quality, recognisable and clear information on where you’re supposed to go and where you are. Klaus alluded to the fact there are no signs on the canal saying where you’d be if you came off the path as an example of where simple improvements can be made, and encouraged the development of a social mobility corridor along the Leeds canal with installation of benches.

In this closing statement around the need for efficient cycling infrastructure, Klaus stated: “This is about climate change, public health, efficiency, urban life … and freedom! We need courageous politicians, and visionary planners and designers.” To build the cycling community for now and tomorrow, we couldn’t agree with Klaus more.

Alongside Klaus, Pete Swift also spoke to the audience about the need for well-designed spaces and infrastructure to promote both a sustainable future and way of travel. 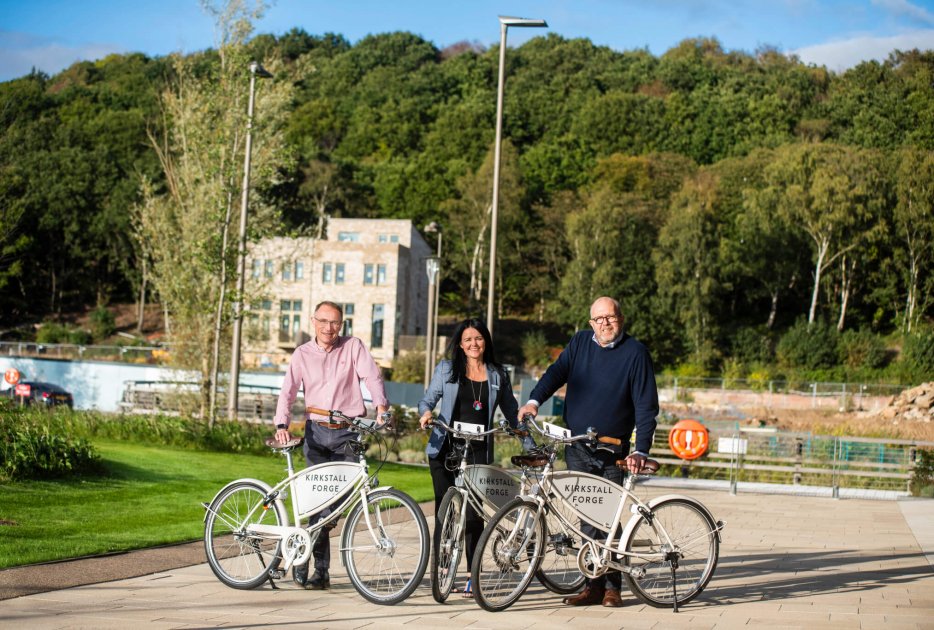 As managing director at Planit IE, Pete has been intrinsically involved with Kirkstall Forge over the last seven years and discussed the importance of creating public spaces which can being enjoyment to those living there and engages with the community where it is based.  He described how the streets and roads are integral to entire project – in both how people can travel from A to B, and how safe the areas are.

Pete undertook the same canal journey as Klaus before the event, and shared the same views stating: “Although there were moments of utter joy, there were moments of ‘we can’t be bothered’…there was even a lack of a ‘ you are here’ sign.” However, he went on to discuss how through applying the right knowledge and not moving away from being bold in decisions, the right infrastructure can be created.

The entire Kirkstall Forge project is integrated through the canal, river, roads, paths and cycle tracks which are all equally as important as the others, said Pete, and he highlighted that its different by design ethos has active travel,  healthy living and a sustainable community at its very heart.

Pete also showcased the Stitch, which will be a prominent feature at Kirkstall Forge. This stretch of public space will be where “everything comes to together” and people can move safely, taking precedent over cars. It will be the development’s “village hall” which not only connect the train station, offices, canal, river and homes, but also be a space for the community to come together to plan for the future generations.

This move away from traditional infrastructure in the UK, as Pete put it, was “taking down the barriers, when others are trying to make them” in creating a sustainable space.

A new development with sustainable travel front of mind

At Kirkstall Forge we have embedded cycling, walking and rail transport at the heart of our development and we are constantly looking at the best examples from around the world to learn from.

With a new railway station on the site, a cycle spa, bike hire, bike maintenance sessions and cycling and walking clubs we are already achieving a modal shift encouraging those who work here to choose more sustainable ways of getting to work. After Klaus’s inspiring visit, we now have even more ideas for how we can make Kirkstall Forge a low carbon and active travel destination.

Back to What's Going On